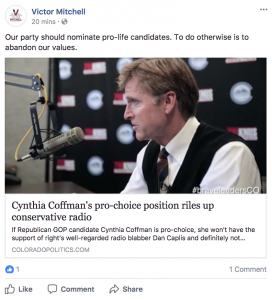 The report, by CBS4 political specialist Shaun Boyd, prompted KNUS radio host Dan Caplis to denounce Coffman and to speculate that she lied about her pro-choice stance during her campaign for attorney general.

Caplis’ hostility reflects the opinion of what appears to be a sizable segment of GOP voters who participate in primary elections. Their position on the abortion issue precludes many pro-choice Republicans from running at all.

In fact, one pro-choice Republican, Ellen Roberts, dropped out of consideration for the U.S. Senate race in 2015 after denying that she’d described herself as pro-choice, when in fact she had done so on the floor of the Colorado Senate.

In taking a pro-choice stance, Coffman could be targeting an unknown number of unaffiliated voters who could participate in this year’s Republican primary. But in doing so, she risks alienating anti-abortion Republicans, who’ve demonstrated their grassroots abilities to push much of their agenda into the GOP platform in Colorado and who’ve seen it adopted by most GOP elected leaders here.