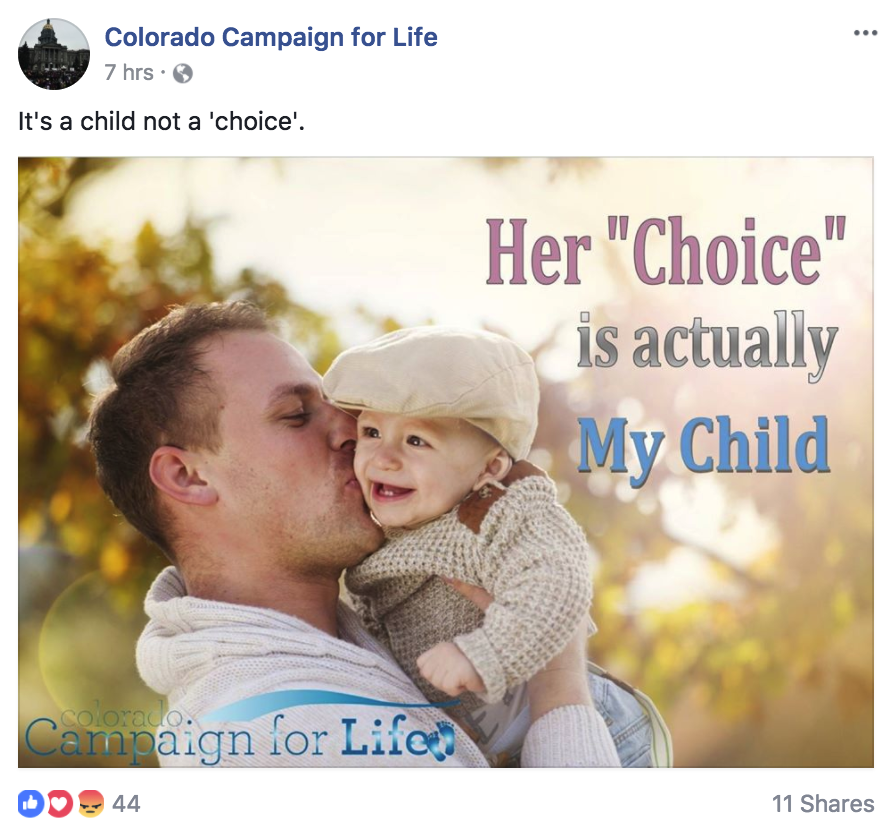 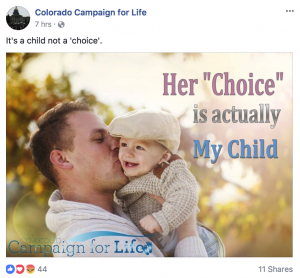 Colorado Campaign for Life, a statewide anti-abortion group, is promoting a Facebook meme with a photo of a man kissing a baby along with the text, “Her ‘Choice’ is actually My Child.”

Colorado Campaign for Life’s Director Christy Rodriguez said the meme’s message is two-fold, first, that the word “choice,” as someone who’s pro-abortion would use it, is actually a “child” and, second, that a potential father should have a say in a woman’s decision whether to have an abortion.

“It’s a child, not a choice,” Rodriguez told the Colorado Times Recorder. “The word ‘choice’ is covering a child, whether it’s a man’s child, a woman’s child, somebody’s grandchild. Calling it a choice doesn’t negate the fact that it’s a child.”

“It takes a man and a woman to have a baby,” continued Rodriquez. “We’re talking about men who have come to the Capitol and testified, ‘Hey, I said I would have paid for this child. I said I would take the baby off her hands. I said I would raise the child, and she insisted on having an abortion.’ A man really has no say in a child’s life until after it’s born.”

Asked to respond to the Colorado Campaign for Life meme, Karen Middleton, director of NARAL Pro-Choice Colorado, called it “insulting and pointless.”

“Men don’t own women or their bodies, and the choice of whether or not to continue a pregnancy belongs to the woman,” said Middleton via email. “End of discussion.”

It’s unclear how much support there is in Colorado for the notion that men should have some sort of say, possibly legal standing, when it comes to a woman’s decision whether to have an abortion. Such provisions would violate federal abortion-rights protections as currently interpreted by the U.S. Supreme Court.

As it is, a significant number of women polled nationally say they had an abortion because their partners wanted them to, according to one study.

Actual or threatened violence by their male partners was sometimes a factor in their abortion decisions.

George Athanasopoulos, a Republican candidate who was defeated by U.S. Rep. Ed Perlmutter (D-CO) last year, tweeted that a father has legal rights to stop an abortion because “that child is of him. It’s part of him.”

“Correct me if I’m wrong,” Athanasopoulos tweeted, “but men are involved in conceiving children. Therefore, we have rights as fathers.”

The Colorado Campaign for Life maintains a presence at the state legislature, backing anti-abortion bills such as the Life at Conception Act, which would define life as beginning at conception and give legal “personhood” protections to fertilized human eggs, also called zygotes. All abortion, even for rape and incest, would be banned under the measure, which died in a House Committee controlled by Democrats.

“Planned Parenthood, NARAL and abortionists always show up to ensure that the politicians bought and paid for by the abortion lobby toe the line and kill the bill in committee,” states the organization’s website.

Personhood abortion bans were defeated overwhelmingly in Colorado in 2008, 2010, and 2014, and about 60 percent of adults believe abortion should be legal all or most of the time.