by
Madeleine Schmidt
posted on
October 25, 2017

News of Colorado state Sen. Vicki Marble’s interaction with an 11-year-old cub scout who questioned her about gun violence made national headlines after he was kicked out of his den last week.

That cub scout, Ames Mayfield, also asked Marble about her infamously controversial comments on race and diet. While discussing mortality rates among African-Americans at a 2013 legislative hearing on poverty, Marble said the following:

“When you look at life expectancy, there are problems in the black race. Sickle-cell anemia is something that comes up. Diabetes is something that’s prevalent in the genetic makeup, and you just can’t help it. Although I’ve got to say, I’ve never had better barbecue and better chicken and ate better in my life than when you go down South and you, I mean, I love it. Everybody loves it.”

Those comments are well documented (there’s audio). But despite evidence to the contrary, Marble told Mayfield that it was all fake news, made up by the big bad media:

“I didn’t [say those things]. That was made up by the media. So you want to believe it? You believe it. But that’s not how it went down. I didn’t do that.”

This falsehood, delivered to the cub scout, along with his ejection from the den, made national news. But the unfavorable coverage didn’t stop Marble from joking about her past remarks on Facebook.

After Marble posted a status about liberals “frantically running for their safe space” due to her positions on the 2nd Amendment, one of her Facebook friends commented, “Maybe they need some comfort food, too.” Here’s how Marble responded:

“Soul Food is my comfort food choice…. love it and PROUD of it !!! Shrimp and grits, sweet potato pie… nothin’ like the south !!!!” 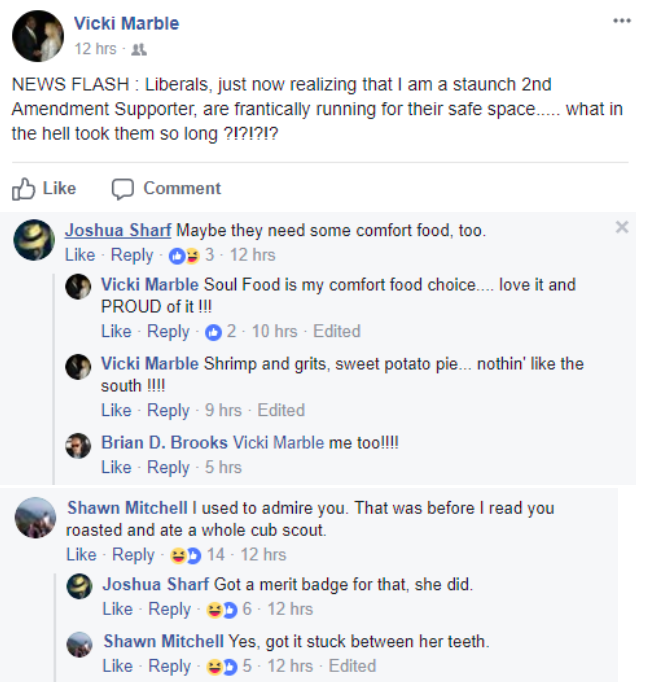 In another exchange on Facebook, Marble doubled down on her assertion that chicken-gate was made up by the media, commenting that her “clarification was reported as a lie” and that she had been attacked in a Denver Post editorial: 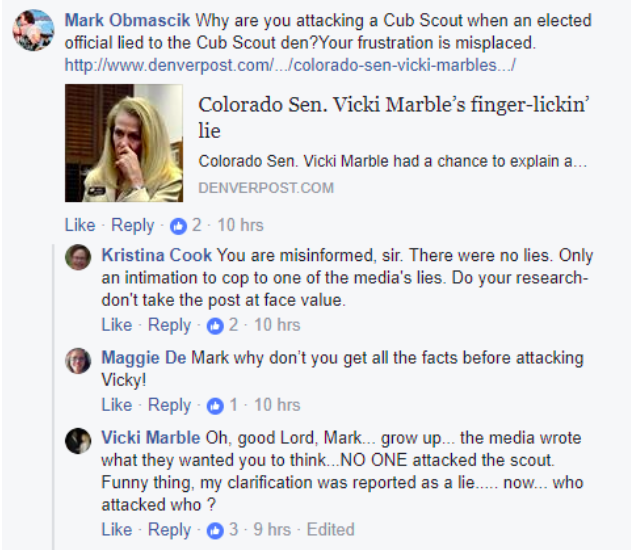 Marble didn’t immediately respond to an email requesting a comment and seeking to know what exactly she thinks the media has “made up” about chicken-gate, and her voicemail box was full as of Wednesday morning.

But Marble is apparently making no effort to put a lid on this controversy. No, as she puts it in the Facebook comment below, she’s “just getting started”: