Chaps is no longer the scourge of the Colorado GOP, but he’s still as ignorant as ever

Vicki Marble invites me to go out for “soul food”

by
Madeleine Schmidt
posted on
October 26, 2017

State Sen. Vicki Marble (R-Fort Collins) isn’t shying away from her controversial remarks on race and diet that became the partial subject of a national news story this month after an 11-year-old cub scout was kicked out of his den for asking Marble some tough questions.

Marble’s remarks took place at a 2013 legislative hearing on poverty, in which the state senator said:

“When you look at life expectancy, there are problems in the black race. Sickle-cell anemia is something that comes up. Diabetes is something that’s prevalent in the genetic makeup, and you just can’t help it. Although I’ve got to say, I’ve never had better barbecue and better chicken and ate better in my life than when you go down South and you, I mean, I love it. Everybody loves it.”

Asked by the scout, Ames Mayfield, why she blames black people for “poor health and poverty because of all the chicken and BBQ they eat,” Marble denied that she said it, telling Mayfield it was “made up by the media,” despite that fact that there’s audio of her comments.

“That’s not how it went down,” she told the scout. “I didn’t do that. That was false. Get both sides of the story.”

A few days later, after being called out by The Denver Post for what they referred to as her “finger-lickin’ lie“, she continued to talk about “soul food” on Facebook.

Then, when I asked her to comment on her continued talk of southern cuisine, she invited me to go join her for a soul food meal.

“Denver has some great soul food…. I want to try Cora Faye’s in Denver. If you are into this type of heavenly experience… why don’t we try it out together,” she emailed.

You read that right. In an email that is essentially an ode to soul food, Marble invited me to dine with her at Cora Faye’s, which serves fried chicken and other classic southern fare: 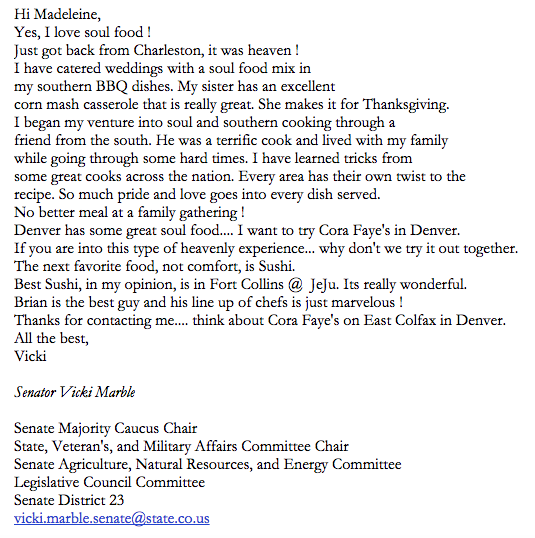 I’ve accepted Marble’s invitation to dine at Cora Faye’s, which I’m sure will be quite the treat.