by
Madeleine Schmidt
posted on
October 3, 2017

Cruz initially criticized the Trump administration for its slow response to the humanitarian crisis in Puerto Rico, where many have been without power and water since the hurricane hit the island nearly two weeks ago.

Trump then accused Cruz of “poor leadership” on Twitter and said that Puerto Ricans “want everything to be done for them.”

Joshua Hosler, who was elected to lead the El Paso County GOP just two weeks ago, was not far behind Trump in his criticisms.

Hosler posted a couple of articles on Facebook claiming that Puerto Rican truck drivers who were on strike didn’t show up to distribute aid from the ports, and commented on one of those articles that the aid wasn’t arriving to those in need “so the liberal running San Juan can say trump isn’t helping”. 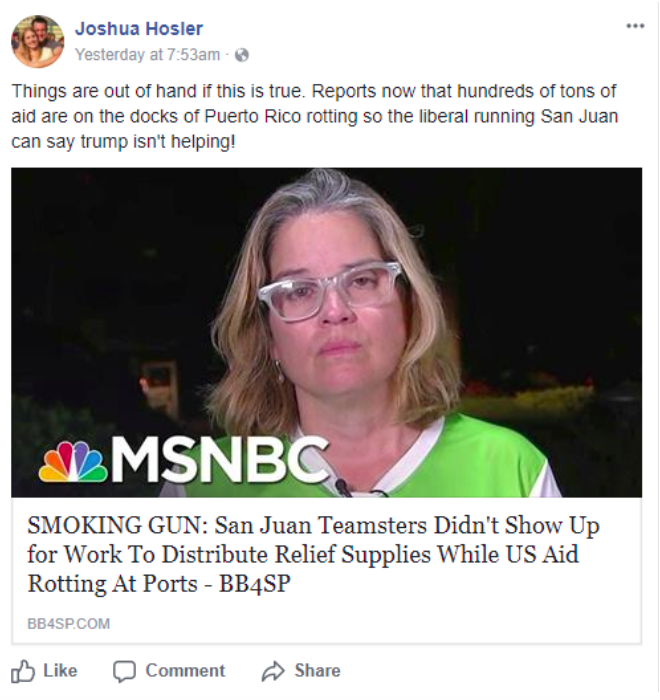 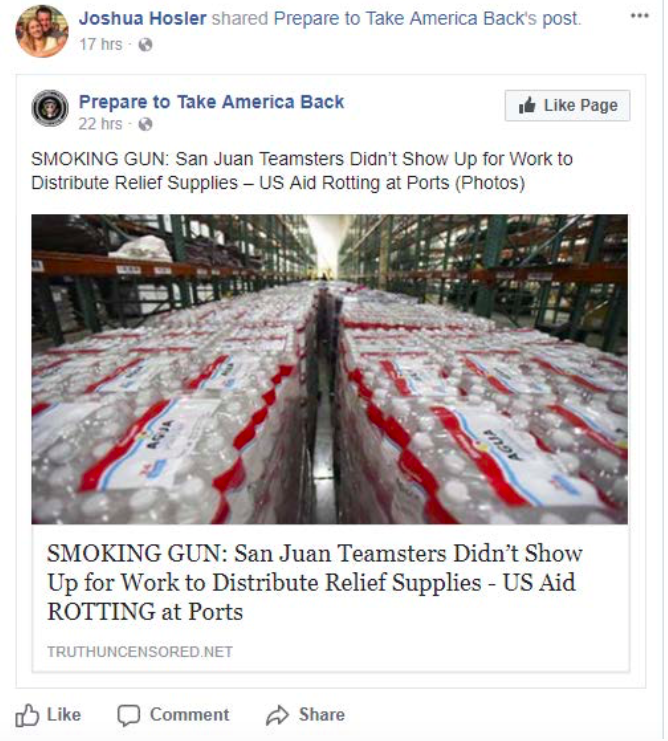 As both Snopes and PolitiFact have now pointed out, the reports that truck drivers in San Juan are on strike and have been refusing to take part in the relief efforts are completely false.

There is indeed a local distribution problem in Puerto Rico. But that problem hasn’t been manufactured by Cruz in order to slam Trump, nor is it the fault of truck drivers, who are facing the same logistical nightmares as many Puerto Ricans who still don’t have basic necessities like fuel, power, food, and water.

Colonel Michael A. Valle, who is leading the relief efforts, explained to the Huffington Post that the hurricane completely ruptured the supply chain on the island, and that the drivers are in no way at fault:

“There should be zero blame on the drivers. They can’t get to work, the infrastructure is destroyed, they can’t get fuel themselves, and they can’t call us for help because there’s no communication. The will of the people of Puerto Rico is off the charts. The truck drivers have families to take care of, many of them have no food or water. They have to take care of their family’s needs before they go off to work, and once they do go, they can’t call home.”

Hosler posted nothing on Twitter or Facebook about how people can help the relief efforts or any condolences for those who are suffering in Puerto Rico.