GOP leader wants me to grow up, man up, and accept his fake news 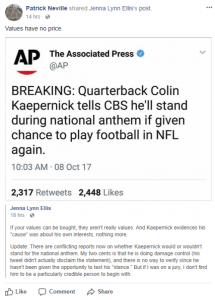 Rep. Patrick Neville, the leader of the Colorado House Republicans, has called me a “snowflake” for politely asking him, in a blog post last week, to remove news from his Facebook page that’s been retracted by CBS and the Associated Press.

Before being hit with the snowflake accusation, I thought Neville and I would quickly agree that he should cleanse the Kaepernick “news” from his Facebook page. It was thought to be accurate when he shared it Oct. 17, but not anymore.

But, alas, no, he didn’t agree. Instead, he tweeted this at me:

Neville: @BigMediaBlog needs to stop being such a #snowflake. End the #fakeoutrage #growup #moveoutofmomsbasement

So I’m a snowflake because I don’t want to see falsehoods on the Facebook page of one of the state’s top Republican lawmakers? 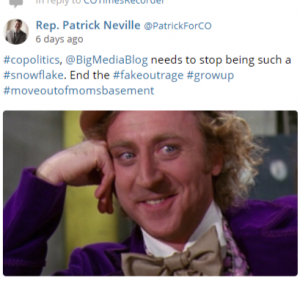 I need to grow up, man up and accept fake news?

Neville referred to an an “update” on the Kaepernick “news” that he posted, saying there “are conflicting reports now on whether Kaepernick would or wouldn’t stand for the national anthem.”

But, again, both AP and CBS retracted the Kaepernick news, so it’s false to assert that “Kaepernick tells CBS he’ll stand during national anthem.” So the news is demonstrably false, even if you don’t want to accept Snopes’ identical conclusion.

I reached out to Neville again for this blog post, and I’m still hoping to hear back from him. It’s unusual for him to back off from any debate, especially with a snowflake like me.