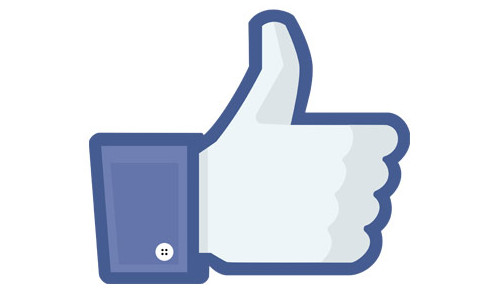 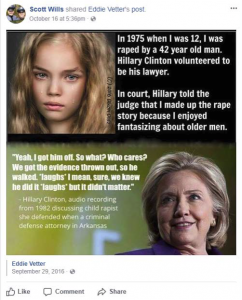 Showing the kind of respect for facts that you’d expect from a school board member, Scott Wills yesterday removed a meme he’d shared Oct. 14 on his Facebook page depicting a Hillary Clinton quote that’s widely been proven to be fake. Here’s the quote from the meme:

“Yeah, I got him off. So what? Who cares? We get the evidence thrown out, so he walked. (Laughs) I mean, sure, we knew he did it. (Laughs) But it didn’t matter.” — Hillary Clinton, audio recording from 1982 discussing a child rapist she defended when she was a criminal defense attorney in Arkansas.

In an interview Thursday, Wills, a Republican on the Elbert County School Board, said he fact-checks all the items he shares on Facebook, and he agreed with me that conservatives like him and progressives like me don’t want fake information on Facebook.

I explained to him that, in fact, he’d posted the false quote on Facebook. And I speculated that he may have gotten confused because part of the meme is, in fact, true. As a 27-year-old lawyer, Clinton was assigned to the case and reached a plea bargain. The false quote was used as part of a campaign accusation that Clinton “volunteered” to defend a rapist.

Wills told me he’s too busy to research the item, but he’d just “take it down.” He did so yesterday, earning him respect from me, even though he appears to be on the opposite end of the political spectrum from me.

At least three other elected officials in Colorado have removed fake news in the past year from their social media accounts, after being alerted to it. In December, State Rep. Polly Lawrence of Roxborough Park and former State Rep. Kit Roupe of Colorado Springs, both Republicans, removed fake Facebook posts, as did Denver Democratic Rep. Susan Lontine. And U.S. Rep. Jared Polis (D-CO) removed a tweet in response to criticism.