Viano claimed in a phone call with the Colorado Times Recorder that he didn’t see and doesn’t agree with the paragraph regarding refugees wanting to rape white women. Viano added that he reads many articles in a given day, and sometimes skims.

I’m told by people close to me that it’s likely a good thing that after nearly three years of wading through the swamp of conservative social media posts, I still have the ability to be shocked by what I read. That was the case last week when I ran across an article posted by the chair of the Denver GOP, Jake Viano.

Just last week, Viano was patting himself on the back and endlessly promoting his philanthropy on Facebook because he helped raise a few thousand dollars for flood relief after hurricane Harvey. No doubt it was a good thing, considering some of those people are temporary refugees from the areas most afflicted by the flooding.

Then, I ran across the following post by Viano, in which he shares an article entitled “BOYCOTT SUCCESS: Starbucks BEGS Conservatives to Come Back”. 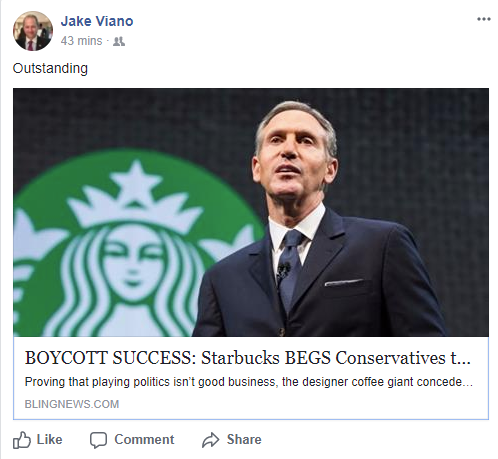 When I clicked through to the link, the first thing I noted was the weird advertisements that usually indicate you are on a fake or ultra-partisan click-bait site. The second thing I noticed is that the author of the “article” was simply “Kim”. No last name. No credentials. Nothing to indicate credibility or expertise on the subject matter. This is, of course, not unusual in conservative media circles. The article itself is the type of over-the-top hyper-partisan nonsense that I expected to see right up until this graph, which pushed it into ultra-racist territory (my emphasis):

The nail in Schultz’ coffin came in January. In response to Trump’s first travel order, the Leftist crybaby announced that Starbucks would preferentially hire refugees worldwide. Those rapists aren’t looking for work; they’re looking for white women to rape and liberal snowflakes to help them force Sharia law on the civilized world.

Got that? Refugees fleeing war-torn regions aren’t looking for “work” or safety, they simply want to rape “white women”.

If I give Viano the benefit of the doubt, I might surmise that he didn’t even read the article and posted it based on a headline that seems to confirm his desired narrative. The alternative is that he’s is a straight-up racist. Best case scenario is that Viano is so careless that he would post an article without reading it, which is not an uncommon thing in the FeverSwamps™.

My question for Mr. Viano is this: If you view yourself as a philanthropist (and let’s face it, truly philanthropic people don’t feel compelled to go on a two-week self-congratulatory media tour to talk about their great work), why would you hold such despicable and clearly untrue views about the nature of refugees?

The real tragedy for Mr. Viano is that this sort of thing is only going to cause the urban population among which he seeks to grow the Republican brand to reject him as the bigot he appears to be.