With Some in Her Party Rebelling, Republican Leader Encourages GOP Voters to Cast Ballots Along Party Lines

Abortion Rights Matter to Young People. Here’s How They Can Get Involved in CO

by
Madeleine Schmidt
posted on
October 17, 2017

After the news of Harvey Weinstein’s decades-long sexual predation broke last week, some Colorado Republicans attempted to construe the scandal as a political thorn in the side of the Democratic Party.

Their attacks stem from the fact that Weinstein is a known Democratic donor. But some Republicans are going so far as to turn the Weinstein scandal into a Clinton scandal, link the Hollywood mogul to Barack Obama, and argue that Weinstein’s support of Democrats voids any assertion of a lack of regard for women’s rights within the Republican Party.

The criticism comes despite the widespread condemnation of Weinstein by Democrats, including Hillary Clinton, as opposed to Donald Trump’s election to the highest office in the land after he was caught bragging about committing sexual assault on tape.

The Colorado GOP on Facebook tied Weinstein to Obama by comparing the following quotes from Meryl Streep and Rochelle Galindo, a state House candidate. 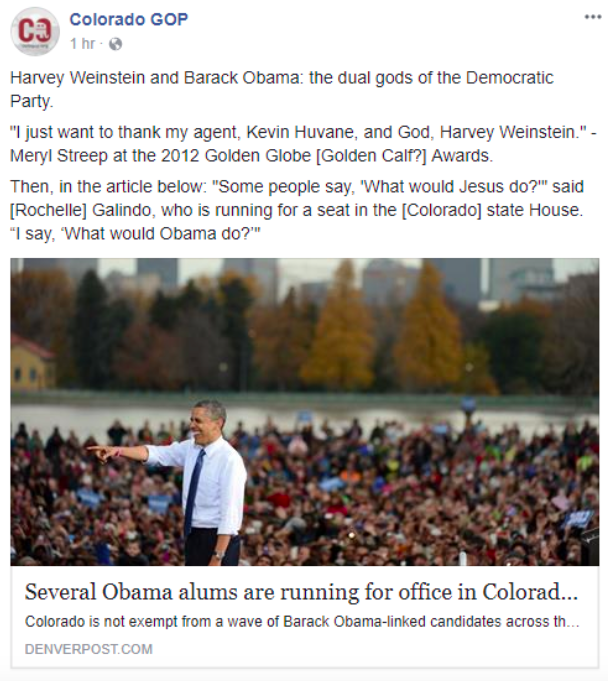 Streep is a vocal Democrat, but her speech was apolitical. And it’s true that Streep joked in 2012 that Weinstein was like a god, but she has since released a scathing statement calling Weinstein’s actions “disgraceful” and “abuse of power” and stated she knew nothing of Weinstein’s misconduct.

The Chaffee County Republican Party insinuated that because Weinstein is a Democrat, “no one will mind” if he commits sexual assault, comparing him to Bill Clinton. 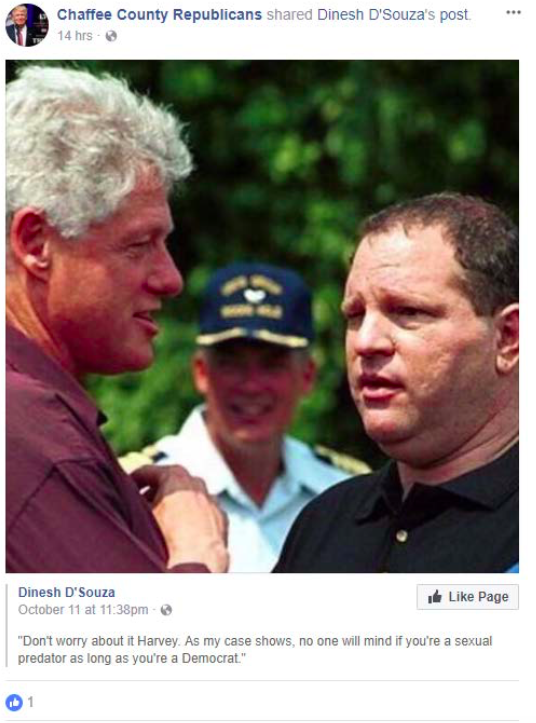 Boulder County Republicans argued that those who marched for women’s rights after Trump’s election are hypocritical for not also protesting Weinstein, despite the fact that he does not hold political office and was fired. 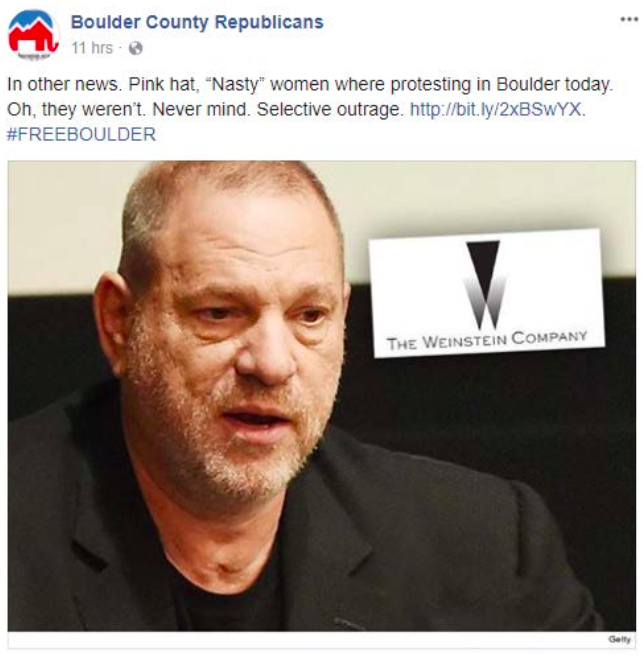 The Yuma County GOP rightfully pointed out that Weinstein’s beneficiaries gave away the contributions they received from him, but then criticized the Democratic National Committee for donating that money to Emily’s List, which works to elect women to office. They criticized two women who received support from Emily’s List, Arizona Congresswoman Kyrsten Sinema and Ann Kirkpatrick, a former Congresswoman from the same state, for taking donations tied to the founders of Backpage.com, an advertising website that was recently found to be responsible for sex trafficking. But both women donated those contributions to the Arizona Coalition to End Sexual and Domestic Violence following the reports. 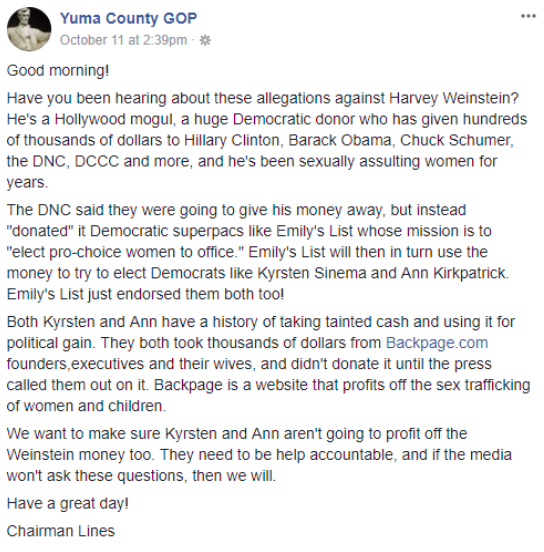 Jake Viano, the chairman of the Denver GOP, shared a post with Weinstein’s photo alongside Democrats whose careers have been enshrouded in sex scandals with the joke that they represent the Democratic Party’s “task force” to combat the “Republican Party’s offensive War on Women”. 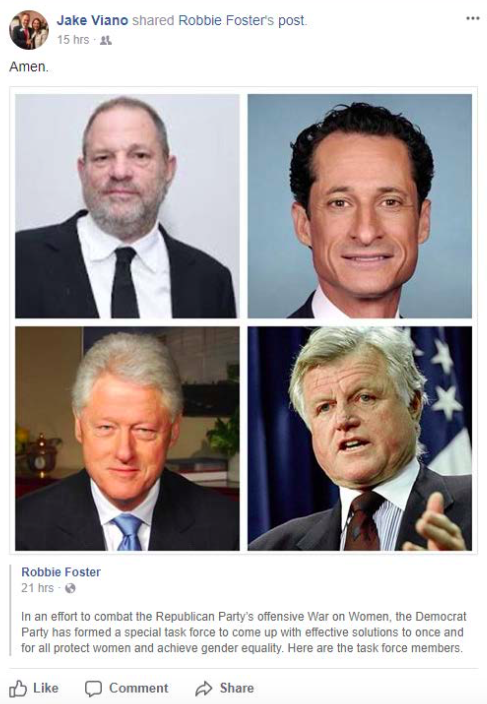 Devin Camacho is the 19-year-old chairman of the Otero County GOP. The Colorado Times Recorder previously spotlighted Camacho for his criticism of feminism, including his apparent view that male privilege is a non-issue.

Camacho was quick to call out Clinton and Obama for not speaking out against Weinstein. Clinton and Obama didn’t respond right away, but they did harshly condemn Weinstein five days after the first story detailing Weinstein’s misconduct broke. 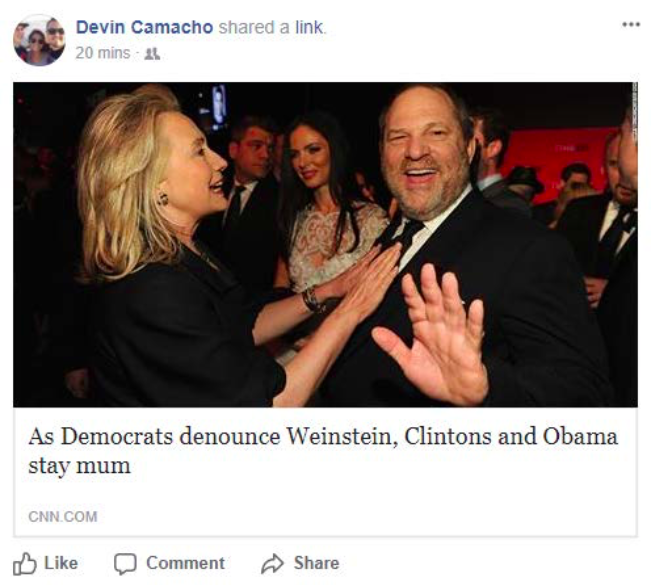 Camacho also shared a tweet insinuating that the left isn’t sufficiently outraged by Weinstein, compared to their disdain for Vice President Mike Pence’s comments that he doesn’t dine alone with women who are not his wife or attend events with alcohol if his wife isn’t present.

As many pointed out, Pence’s inability to eat alone with a woman or drink alcohol around women without cheating on his wife basically admits he has no self-control when it comes to respecting women’s boundaries, not to mention that it puts women at a professional disadvantage. It’s also worth emphasizing that Mike Pence is the Vice President of the United States, and Harvey Weinstein has never held political office and no longer has a job because of his actions.

Camacho also shared this tweet from Kellyanne Conway, who criticized Hillary Clinton for not speaking out about Weinstein’s record of sexual abuse sooner.

Remember that last October, when Conway was asked about how she could defend Trump after his admission of sexual assault, said “[sexual assault] is a very unfortunate phrase, and people really should stop using it,” and in November that “it doesn’t matter because Donald Trump promised he’ll be a president of all Americans.”

All of the Republicans highlighted in this post continue to support Trump.