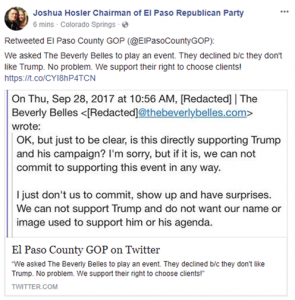 After the Beverly Belles, a group of Andrews-Sisters-style singers, rejected his offer to play at a GOP fundraiser, Joshua Hosler, who’s the newly elected leader of the El Paso County Republican Party, tweeted:

“We asked The Beverly Belles to play an event. They declined b/c they don’t like Trump. No problem. We support their right to choose clients!”

I asked Julia Tobey, who owns the Beverly Belles, why she didn’t want to perform for Hosler’s group.

She looked at group’s website, she told me, and found recordings of Trump officials praising El Paso Republicans. In one voice mail on the website, Donald Trump, Jr., called from “corporate headquarters in New York” to tell the regional field director in the El Paso GOP office that “my father really appreciates” his work, “the family gets it,” and “we’re going to win this thing.”

Tobey said she and her organization, which is based in Denver and Los Angeles, “in no way support Donald Trump” and would not want it to appear as if they were helping raise money for him.

“Since Trump moved into the White House, I am most saddened by his aggressive attack on the rights of our African-American, Muslim, Mexican, LGBTQ, immigrant and refugee American brothers and sisters,” Tobey emailed me, emphasizing that she was speaking for herself and not all the members of her company. “I feel called to stand up and actively support these minorities.

“And also, as a female-run organization, we would never choose to support a president who has a history of blatant sexism and actions that objectify and degrade women. We are heartbroken he has actively pursued policies to strip women of hard-earned rights to make choices about our own bodies and do not support him or his administration in any way.

Asked about the Beverly Belles, the GOP’s Hosler said they are “extremely talented,” and he would definitely have enjoyed their performance, having listened to their style of music as a kid with his grandfather.

I told Hosler that I thought his tweet seemed intended to equate the decision of the Beverly Belles not to play at a Republican fundraiser with the Colorado baker who discriminated against a gay couple by refusing to make them a wedding cake.

That wasn’t the “original intent” of his tweet, which was aimed to promote liberty, he said.

Still, he said, “I can see the direct correlation. That is clearly something that was parallel.”

In fact, the baker violated Colorado law by discriminating against gay people, who are protected under Colorado’s Public Accommodations statute. Just as a shop like a bakery can’t discriminate based on race or sex.  But a baker has the right to refuse service to people of either sex who love Obama for political reasons.

As Republican John Suthers, who served as Colorado’s attorney general, said on the radio a few years ago:

And so in Colorado, essentially, sexual orientation has essentially the same protection as race in terms of anti-public discrimination laws.

So, if you have a business, whether it be a motel business, restaurant business, cake shop, and hold yourself out to the public, you must abide by this public accommodations law. And in this case, it was alleged, that a gay couple who’d been married in another state, wanted to have a celebration in Colorado, went into this cake shop, were very frank with the owner about what they wanted to do, and he refused to bake them a cake, despite the fact that they could have walked a blocked and got the cake at another bake store….it does appear this individual violated the public accommodations law, so the case was brought.

As for the event for which Hosler hoped to book the Beverly Belles, it is scheduled for Oct. 27, billed as a Monte Carlo evening. Hosler described it as a “fun fundraiser” without political speeches that “put everyone to sleep.”

“It wasn’t a fundraiser for Trump,” said Hosler. “He wouldn’t get any of the money.”

But didn’t El Paso Republicans help elect Trump and would do so again?

“We are in theory connected to Trump,” Hosler said. “Trump is a Republican, and we are pushing the Republican Party. So in a sense we are building his base of support, but it does not directly support him. It supports the Party.”

The Beverly Belles, of course, are not the only performing artists who’ve rejected Trump-related events.

The list of performers who said they wouldn’t perform at the Trump inauguration included Garth Brooks, Elton John, and Celine Dion.

The Rockettes made it voluntary for their dancers to perform at Trump’s inauguration, after an outcry from some members of the troupe.

In the video below, Tobey and other performers discuss their work–and sing.