Alamosa Republican to Fellow Conservatives: “Open Up Your Hearts” to Young Immigrants

by
Madeleine Schmidt
posted on
September 18, 2017

State Rep. Dave Williams, a Republican from Colorado Springs, routinely posts about crimes committed by immigrants on his Twitter account despite the fact that the crime rate among those born in the United States is much higher.

Now, in the wake of Trump’s announcement to end the Delayed Action for Childhood Arrivals (DACA) program, Williams has focused his tweeting on crimes committed by children who were brought to the country by their parents and are protected from deportation under DACA.

But immigrants who have committed crimes are not eligible for DACA, and so-called Dreamers are not allowed to keep their DACA status if they do commit a crime.

Last week Williams tweeted an article from Breitbart that listed 50 of the 2,139 Dreamers who have had their DACA protections terminated after committing crimes with the comment “No dreams for these American victims, only nightmares.” 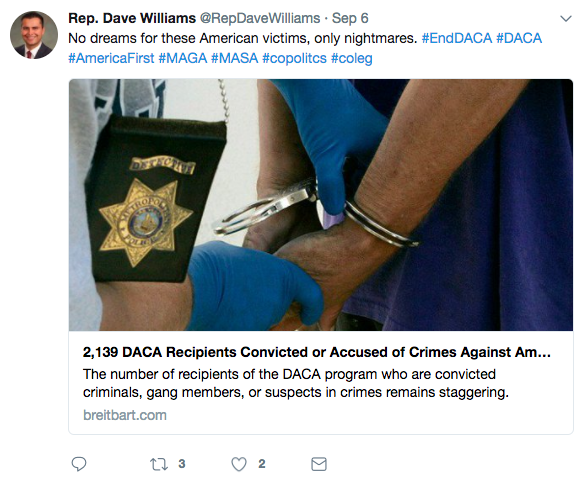 It is true that 2,139 DACA recipients have committed crimes, but all of them have lost their DACA protections as a result, and many subsequently faced deportation. But that number makes up just .26% of the 800,000 young immigrants who receive DACA benefits, an incredibly low crime rate compared to those born in the United States. Four times as many Americans are currently in prison, and about 35 times more Americans have ended up behind bars at some point in their lives before the age of 34.

The Breitbart article headline is slightly misleading in its assertion that Americans are victims in all 2,139 cases where a Dreamer lost DACA status after committing a crime. According to the article, among the most common crimes committed by Dreamers are “alien smuggling,” drug offenses, and DUI charges. Dreamers can also lose DACA protections for committing misdemeanors, many of which are victimless crimes.

Again placing blame for the actions of a few on 800,000 Dreamers, Williams tweeted an article from conservative news website The Daily Wire that details cases in which Americans were killed by Dreamers with the hashtag “#EndDACA.”

Williams’ attacks on Dreamers aren’t limited to claiming they make the country less safe. He also criticized one student for waving a Mexican flag, and retweeted Ann Coulter’s assertion that Dreamers are accepted into medical school at the expense of American applicants with better qualifications. 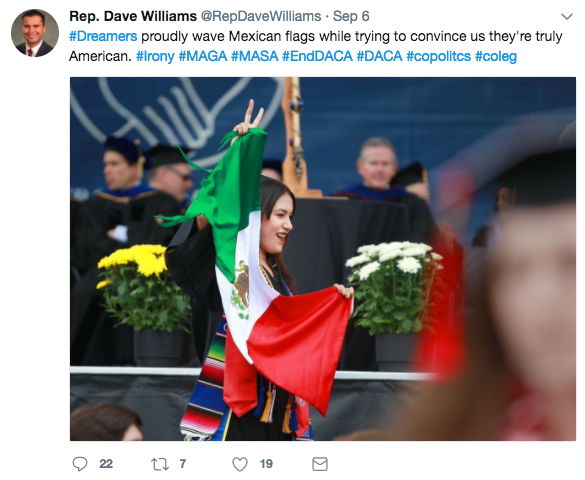 Williams recently praised the pardon of Joe Arpaio, the former Arizona sheriff who was convicted of criminal contempt after defying a court order to stop illegally targeting and detaining Latinos suspected of being undocumented immigrants. 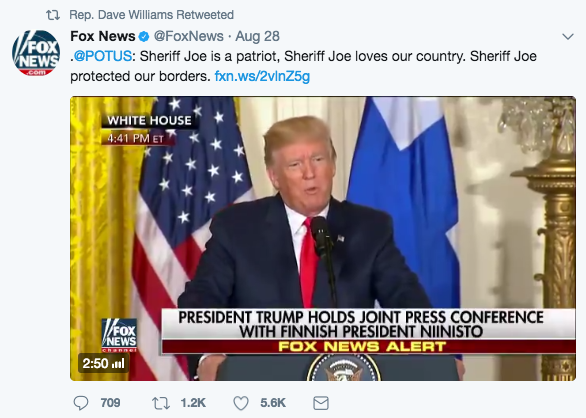 These attacks on immigrants are not out of line for Williams, who once claimed immigrants “destroy American lives” and that not all cultures are equal. Williams also received national attention earlier this year for pushing a bill that would have made it a criminal offense for government officials to enact sanctuary city policies.