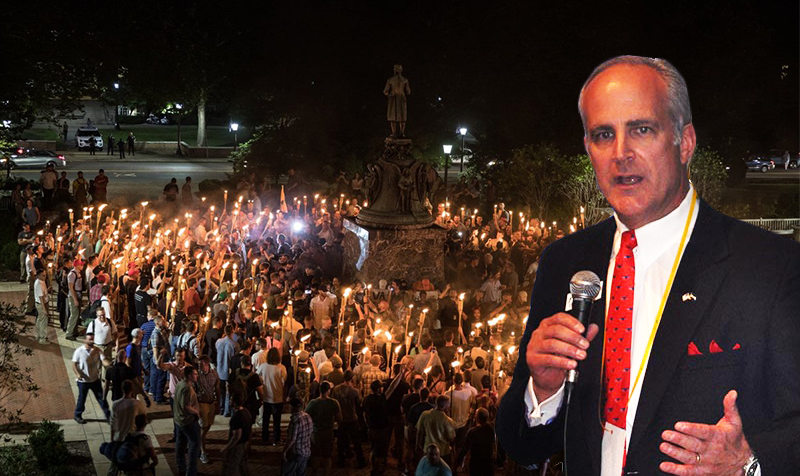 Colorado Republican Chairman Jeff Hays made some news last month in the wake of the Charlottesville Nazi attacks by offering up the following quote:

“It’s amazing that we have been lured into this argument that we’re not racists. It’s absurd,” said Colorado Republican Chairman Jeff Hays. “Why would we feel compelled to do that?”

He was referring to the Republican National Committee’s condemnation of the Nazis and white supremacists who showed up in Charlottesville and murdered a young woman and brutalized others. He seemed to be implying that it is obvious that the GOP is not racist, and so the resolution to condemn was unnecessary and played into the hands of people unjustly trying to paint them as such.

That is interesting considering the GOP’s history of nominating white supremacists, frequenting GOP fundraisers put on by racists, allowing racist candidates to run for the Colorado State Legislature, and worshiping the Confederate battle flag. 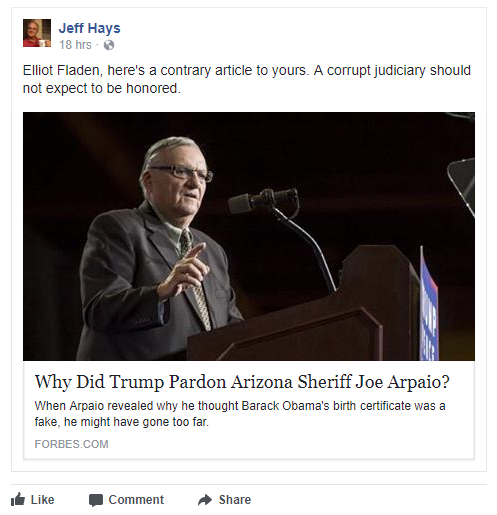 He posted this article in response to fellow Republican Elliot Fladen’s apparent criticism of the pardon.

Let’s set aside that the premise of the article completely ignores the fact that accepting the pardon is an admission of guilt by Arpaio. In light of this full throated defense of the infamous sheriff, I’m not sure how Hays can find it “absurd” that his party needs to defend against accusations of racism. He is himself a big fan of a notorious racist. It also makes it easier to understand why racists like Raymond Garcia and Tom Ready have a welcome mat in the Colorado GOP that Jeff leads.

Here is a list of Arpaio’s misdeeds in Arizona, which go far beyond what he was eventually charged for:

-Referred to his “tent city” for prisoners as a concentration camp.
-Bragged about spending more to feed dogs than human inmates.
-Allowed prisoners in his jails to die at alarming rates.
-Withheld resources for investigations of sex crimes, many of which were perpetrated against young children.
-Arrested reporters for covering him.
-Staged a fake assassination attempt against himself, costing taxpayers more than $1 million.
-His officers burned a dog alive for no reason, then laughed as the dog’s owners cried.
-Paid a private investigator to go after a judge who found him guilty of racial profiling.

So yes, Mr. Hays, your party does need to defend itself. The fish rots from the head, and your apparent desire to apologize for an infamous racist is making it reek.