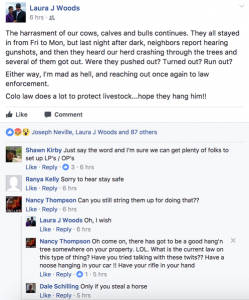 Arvada’s former State Sen. Laura Woods updated her friends on Facebook about the struggles she’s been having with her livestock where she is now living or working.

She’s apparently so upset with someone who allegedly tampered with her cows, calves, and bulls that she hopes they “hang him.”

Asked by a commenter if you can “still string them up” for stealing livestock or running them off, Woods apparently wrote, “Oh, I wish.”

Woods, who does not return my calls and could not be reached to verify the post, provided by a source, lost her seat in a hotly contested race in November against Democratic State Sen. Rachel Zenzinger.