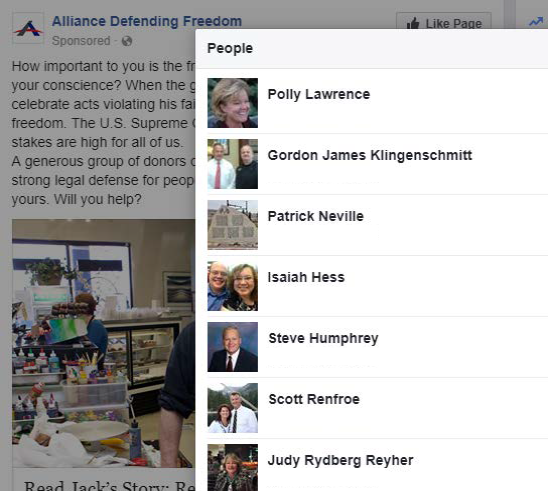 The conservative group Alliance Defending Freedom (ADF), which has been spotlighted as a hate group by the Southern Poverty Law Center, recently sought donations on Facebook for its legal defense of Jack Phillips, the Lakewood baker who violated Colorado law for refusing to sell a wedding cake to a gay couple.

The ADF suspected that eventually, one of the cases would make it to the Supreme Court.

“We thought that it was only a matter of time until the Court actually had to take one, because it’s such a brewing issue that’s going on nationally,” David Cortman, senior counsel with ADF, told Ross Kiminsky on his KHOW (630am) morning show.

On June 27 the U.S. Supreme court agreed to hear arguments in the case of Jack Phillips, owner of Masterpiece Cake Shop, who was found to have discriminated against a gay couple seeking a wedding cake.

Jack Phillips and all of our clients, they gladly serve everyone. As you mentioned, they’ll bake cakes for all other types of events. But when it comes down to two particular things:   number 1, should the government use its laws to force someone to speak a message that they disagree with […], and then, should they force someone to participate or promote an event that violates their rights of conscience.  And I think that in a country like ours, with the freedoms that we have, we shouldn’t be doing that, regardless of your religious beliefs, regardless of your views on any type of issue. I don’t think we want the government going that far,” stated Cortman during his interview with Kiminsky.

On May 30, 2014, the Colorado Civil Rights Commission concluded that Masterpiece Cake Shop unlawfully discriminated against David Mullins and Charlie Craig by refusing to sell them a wedding cake.​ Jack Phillips stated that due to his religious beliefs, the store’s policy was to refuse service to customers who who wanted to celebrate a same-sex wedding. Longstanding Colorado state law prohibits businesses from denying service based on race, sex, marital status or sexual orientation.

The couple had filed complaints with the Colorado Civil Rights Division (CCRD) arguing that Masterpiece had violated this law, and the CCRD ruled that Phillips had indeed illegally discriminated against Mullins and Craig.