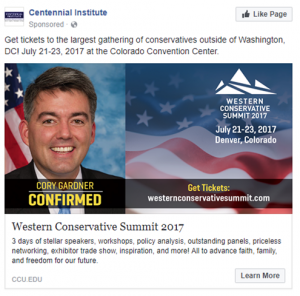 The Centennial Institute’s “Western Conservative Summit” bills itself as the “largest gathering of conservatives outside of Washington, D.C.,”  drawing thousands from across the country. Trump even spoke there last year.

But this year, one of the biggest draws is apparently U.S. Sen. Cory Gardner (R-CO), whose photo is featured in an online ad for the event along with the word, “CONFIRMED.”

Gardner’s appearance at the conservative gathering may draw progressives to the event along with others who’ve been clamoring for an in-person town hall meeting with Gardner–even going so far as to direct questions to a cardboard cutout of Gardner at a Denver school earlier this year.

Ticket prices at $200 for the weekend-long event (July 21-23) may dissuade folks who aren’t committed to the conservative cause, but day passes ($120) and “Patriot” passes ($100) for those under 30 (and educators, military, and others) are available.

Gardner is the only member of the Colorado congressional delegation who has not held a town hall meeting since the election of Trump. He’s spoken to numerous private groups, however, and he’s held conference calls with thousands of constituents.

Trump has been invited to this year’s summit event, the theme of which is “Making Goodness Fashionable.”