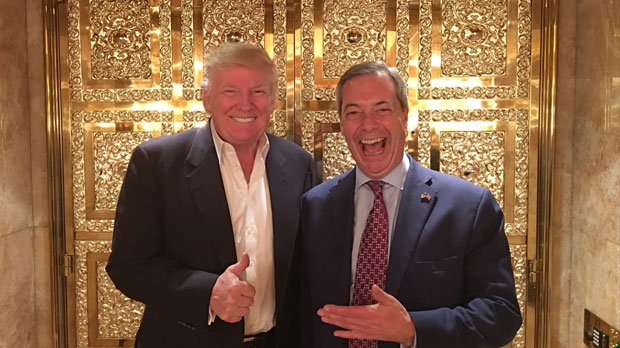 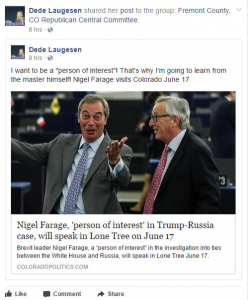 UPDATE: Former Colorado Trump Campaign staffer Dede Laugesen replied to my request for clarification of her Facebook post: “Facebook is a place of friendly comments and such, and I was just making an off the cuff remark about what it must be like to be a celebrity like Nigil Farage,” said Laugesen. “That’s all.”

At this point, you’d think no one in the Trump campaign is running around saying, “I want to be a ‘person of interest.'”

But wait, there is such a person, and her name is Dede Laugesen, the Trump Campaign’s Colorado Coalitions Director.

She’s been on Facebook promoting the June 17 appearance in Colorado of Nigel Farage, the Brexit leader who’s reportedly a “person of interest” in FBI’s investigation of Russian meddling in the last election.

In one post promoting Farage, obtained from a source, Laugesen wrote, “I want to be a ‘person of interest’! That’s why I’m going to learn from the master himself. Nigel Farage visits Colorado June 17.”

Laguesen did not return a call seeking clarification, so I’m forced to speculate here, but if Laugesen is joking, it symbolizes the extent to which the Trump campaign itself isn’t taking the FBI investigation–or the attack by Russia on our elections–seriously.

U.S. Rep. Ken Buck (R-CO) showed the same indifference when he recently told a conservative radio station that journalists are “inventing this Russia story.” So did U.S. Rep. Mike Coffman (R-CO) when he suggested in February that the FBI should be investigated for Russia-related leaks.

If it’s not a joke, then you wonder if Laugesen knows why Farage is reportedly a person of interest. After all, she says she wants to learn from him. I mean, Laugesen was Trump’s Colorado coalitions director. Did the coalition include Russia?

That’s a serious question for a Trump official who’s telling the world she wants to be a person of interest in the FBI’s investigation of the president’s election campaign. I’m sorry, this is not a joking matter.