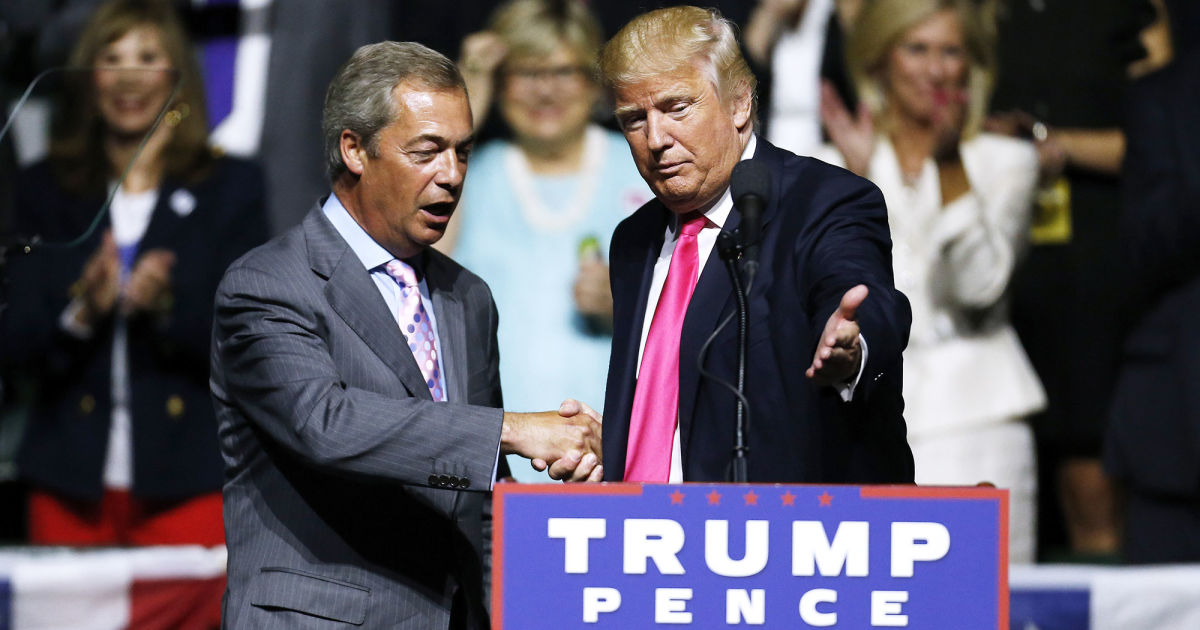 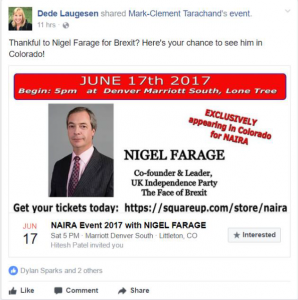 Nigel Farage, the former head of the United Kingdom Independence Party (UKIP) who led the charge for Brexit, is scheduled to speak in Colorado this month.

The National Asian Indian Republican Association (NAIRA) named Farage, whom they aptly called “the face of Brexit,” as the special guest for their annual gala, slated for June 17 at the Marriott South in Lone Tree, with tickets starting at $125.

Farage stepped down as head of UKIP following his successful campaign for Brexit, but he has remained politically involved since then, including speaking at a campaign rally for Donald Trump.

In a brief appearance on KNUS 710-AM’s Peter Boyles show this morning, Farage talked with guest hosts Chuck Bonniwell and Julie Hayden about his upcoming Colorado visit, and said he’d speak about his Brexit success, his involvement with the Trump campaign, and how to save our civilization from jihadism, which he called a “great threat that faces the whole of the West.”

Farage also addressed this morning’s report from The Guardian that he has been named a person of interest in the investigation into possible collusion between Russia and Donald Trump’s presidential campaign.

Farage called the Russia allegations a conspiracy theory that liberals and the media are spinning because they “can’t accept the fact that they’ve taken a beating” with Brexit and Trump’s election.

“These people are desperate!” Farage exclaimed.

The Guardian reported that the FBI’s concern about Farage stems from his connections to Trump associates and WikiLeaks founder Julian Assange, whom Farage visited last month. WikiLeaks published hacked emails that weakened Clinton’s campaign, and is suspected of working with Russian officials in their effort to influence the 2016 election.

Farage pointed out on Boyles’ show that being the newest person of interest in the Russia investigation might raise the profile of his Colorado visit.

NAIRA, an official GOP affiliate, was founded by Asian Indians in Colorado to promote their community within the Republican party, according to their website.

The event was promoted on Facebook by Dede Laugesen, who was the coalitions director for the Trump campaign in Colorado. Among those who liked the post is Dylan Sparks, a former regional Trump campaign leader in El Paso County.