Watch Out for Wolves in RINO, North of Denver

After witnessing Trump blow through as much money on his weekly golf excursions in five months as Obama did in nearly eight years, I thought I would revisit this post by State Senator Tim Neville (R-Littleton). 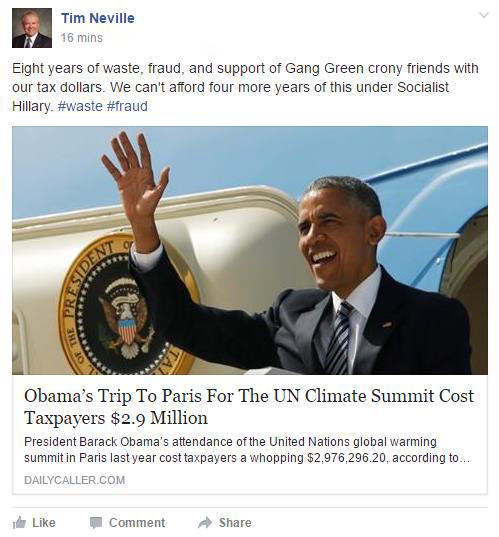 Got that? Neville was mad that the Obama administration spent $2.9 million on an official state visit to an important summit. What I couldn’t find on Neville’s timeline was any complaint about the cost of Donald Trump’s weekly visits to his golf courses or Mar-A-Lago.

In total, according to conservative publication Judicial Watch, Obama spent $96 million on travel over his eight years as president.

Through about four months as president, according to a report by CNN, Trump has spent over $20 million just traveling to Mar-A-Lago. This means Trump will take just over a year to eclipse the total amount spent by Obama in eight years. Add in the high cost of housing his wife and son in Trump Tower New York—estimated at well over  $100,000 per day—and he will surpass Obama even sooner.

Needless to say, it seems like Neville’s policy is to criticize normal behavior by Obama as somehow extravagant and unnecessary, while completely ignoring the lavish spending by Trump. The only reason I can think of for this contradiction is that Trump has an “R” by his name and is therefore, in the view of Neville, faultless.