Raymond Garcia, the GOP candidate who lost races in 2014 and 2016 for the District 1 seat in Colorado’s House of Representatives, is a person who will believe literally anything he reads on the internet and happily pass it on without vetting. In this case, he posts an old “news” story from 2016 claiming a Wikileaks release proves Hillary Clinton killed James Foster as if it is brand new. 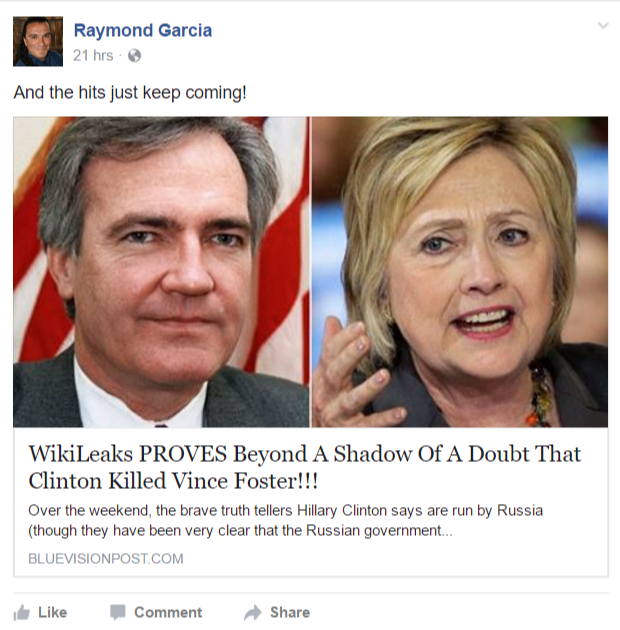 As usual, if you try to track down where the “information” in this story comes from, you just keep clicking through fake news sites until you arrive at the source. The bluevisionpost.com story is verbatim lifted from a www.usadailytime.com rewrite of the original thelastlineofdefense.org fake news story. All of these sites are either “clickbait” sites that reprint or rewrite conspiracy theory posts, or they are 100% “fake news” as detailed by SNOPES.

People who run for office under the flag of the GOP feel perfectly comfortable posting fake news. There is something rotten happening in the Republican party. They either don’t care, or see it as a win for them when they feed their base misinformation like this.

Perhaps Raymond Garcia should take the Fake News Pledge and clean up his ugly act.