PHOTOS: Thousands rally for gun safety at March For Our Lives in Denver

Casper Stockham unsuccessfully ran a campaign to unseat U.S. Rep. Diana DeGette (D-Denver), and will likely run again in 2018. I’ve flagged a few of Casper’s more egregiously nutty posts, because if nothing else, he’s entertaining. Casper’s fake news beliefs are instructive, however, and represent a microcosm of how the GOP base consumes news. Here’s what he said on Facebook a few days ago: 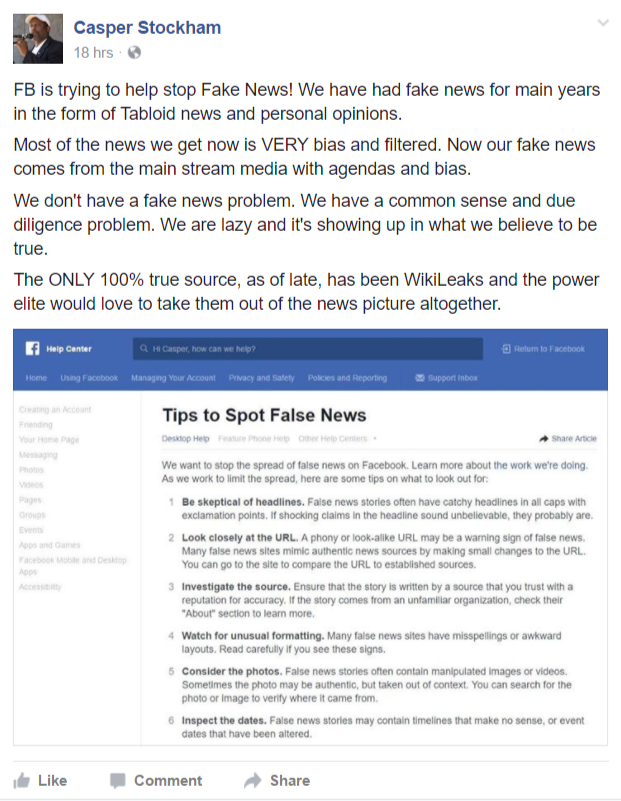 Got it? In response to a Facebook initiative to get people to be more discerning in their news consumption, Casper describes mainstream news sources as “fake” and Wikileaks as 100% true.

Wikileaks is not even a “news” source, as Casper describes it, and they have done some incredibly dangerous things, including “doxing” millions of Turkish women for no discernible reason, expressing antisemitism, and leaping to the defense of pederast champion Milo Yiannopoulos. The information they have released has also not been “100% true”. 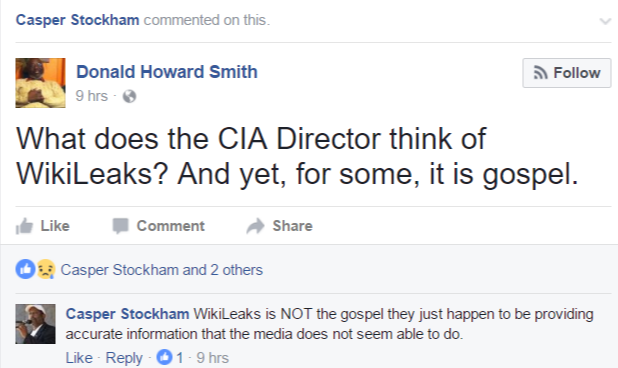 Casper seems to know that Wikileaks is considered “hostile” to our interests and in league with Vladimir Putin, an authoritarian dictator and antagonist to the U.S., yet he embraces them anyway.

Just a few years ago, Republicans were calling for the arrest and prosecution of Wikileaks founder Edward Snowden and contributor Julian Assange. Here’s what Representative Peter King (R-NY) had to say in 2010:

“I am calling on the attorney general and supporting his efforts to fully prosecute WikiLeaks and its founder for violating the Espionage Act. And I’m also calling on Secretary of State Hillary Clinton to declare WikiLeaks a foreign terrorist organization, by doing that, we will be able to seize their funds and go after anyone who provides them help or contributions or assistance whatsoever. To me, they are a clear and present danger to America. I’m confident you’ll find many people in the Congress, the House and Senate, who will support my demand for the prosecution, and also the declaring of WikiLeaks to be a foreign terrorist organization.”

Despite our own intelligence service’s admonition that they “…find the celebration of entities like WikiLeaks to be perplexing and deeply troubling”, the GOP base and their leaders embrace them.

For many Republicans, including Casper, it seems that hatred of their fellow Americans is a bigger motivating force than love of their country. I can’t think of another explanation for this phenomenon.