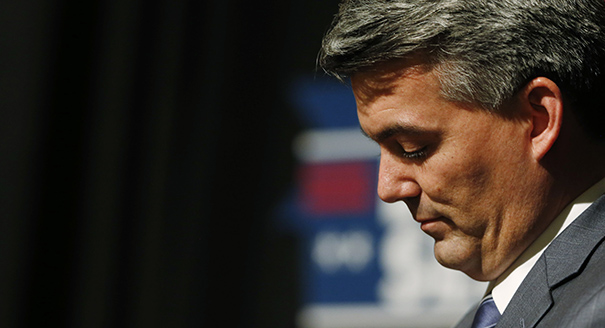 In an interview today with NPR’s Morning Edition host Steve Inskeep, U.S. Sen. Cory Gardner (R-CO) continued his pattern of refusing to take a stance on the GOP proposal to replace Obamacare.

Pressed on whether he’d vote for the bill in its current form, Gardner leaned close enough toward a “yes” that Inskeep responded with, “Is that a yes?”

But Gardner, who’s known for sliding around reporters in interviews, still didn’t say yes, and the interview ended without an answer.

INSKEEP: Are you comfortable with the measure as it is now, or do you need to see it amended in order to vote for it?

GARDNER: This is a legislative process. It will be amended in the House as, I think, tonight as planned. And then it will continue to go through a legislative process in the Senate. So bottom line is what we have right now, the Affordable Care Act, is unacceptable for the American people because it’s hurt far too many people.

INSKEEP: Are you OK with the Medicaid provisions, limiting the amount of money that would go to states for Medicaid?

GARDNER: What we have to do is make sure the states have flexibility and more functionality when it comes to implementing a program. I have full confidence that the states can do a better job than Washington, D.C., in many areas of government. And so I look forward to working on a solution that works for the states and works with the people.

INSKEEP: Is that a yes? Just got a couple seconds. That’s a yes, you like the Medicaid provision?

GARDNER: Well, again, I think – this is a process. I’m not going to commit to a hypothetical bill.