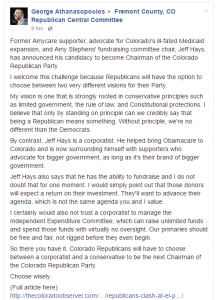 In an interview last week, Athanasopoulos couldn’t cite evidence of Hays supporting S.B. 200. But he did talk a lot about Hays’ close ties to Amy Stephens, even after S.B. 200 had become law.

Looper had the support of grassroots Republican activists who fumed throughout the year (and to this day) on talk radio and elsewhere about Stephens’ betrayal of conservative principles by backing “Amycare.”

Stephens pointed out to reporters at the time that her bill was endorsed by the Colorado Springs Chamber of Commerce and other conservative entities–and that she wanted to keep Obamacare out of Colorado.

At one point during her bitter primary battle against Looper, the Stephens campaign established a “STEPHENS TRUTHTEAM” to argue that if Colorado didn’t set up its own healthcare exchange, the federal government would do so. And Stephens’ campaign pointed out that Obamacare doesn’t cover abortions.

In a 2012 letter-to-the-editor signed “Jeff Hays,” Hays apparently endorsed Stephens. The letter was penned to the Colorado Springs Gazette.

Hays: I’ve seen good leaders and bad during my Air Force and business careers, but the best had three primary characteristics: integrity, competency, and energy. Republican House Majority Leader Amy Stephens has all three in abundance….

Amy Stephens applies her abundant energy in leading her colleagues, listening to constituents, mentoring new representatives, and raising support for her fellow Republicans. She fights for her values and for the people of Colorado. Her honors and awards are numerous, but she values the affirmation of her constituents and the respect of her colleagues far above any plaque or title.

Hays, who’s an Air Force veteran, did not return an email seeking comment on the letter and about his past position on S.B. 200.

…Jeff is a corporatist. He helped bring Obamacare to Colorado and is now surrounding himself with supporters who advocate for bigger government, as long as it’s their brand of bigger government.

Hays and Athanasopoulos are the only candidates who’ve announced they’re running for Colorado GOP state chair, who is elected by statewide Republican leaders at a convention.

The current chair, Steve House, is expected to announce today whether he’ll be seeking another term. If he chooses not to run again, Colorado GOP Vice Chair Derrick Wilburn may enter the race, Wilburn has said.