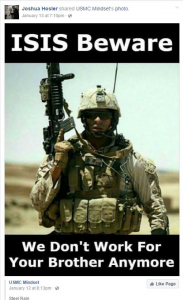 With the high profile endorsement of Williams in his pocket, Hosler’s social media activity is under scrutiny.

Does this mean Hosler thinks Obama is member of ISIS or an Islamic extremist?

No, Hosler told me in an interview today. The meme was intended to blame Obama for ISIS, Hosler said, who’s touting the Williams endorsement below.

Hosler believes Obama is responsible for the creation of ISIS, due to his decision to withdraw American troops from Iraq. Hosler says the troop withdrawal created a “vacuum” that allowed ISIS to form.

“The vacuum there was created by Obama and that created ISIS,” said Hosler, who emphasized that he does not believe Obama is a Muslim. Hosler said he served in Iraq in 2009, fighting in Mosal. 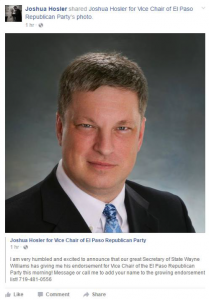