I ran across this post by former state legislator turned El Paso County Commissioner Mark Waller (R) in which he claims a link between an increasing homeless population in Colorado and the legalization of cannabis. To support his view, he links to this article, which doesn’t contain a shred of supporting evidence for the claim other than anecdotal quotes and data that does not support a causal conclusion. 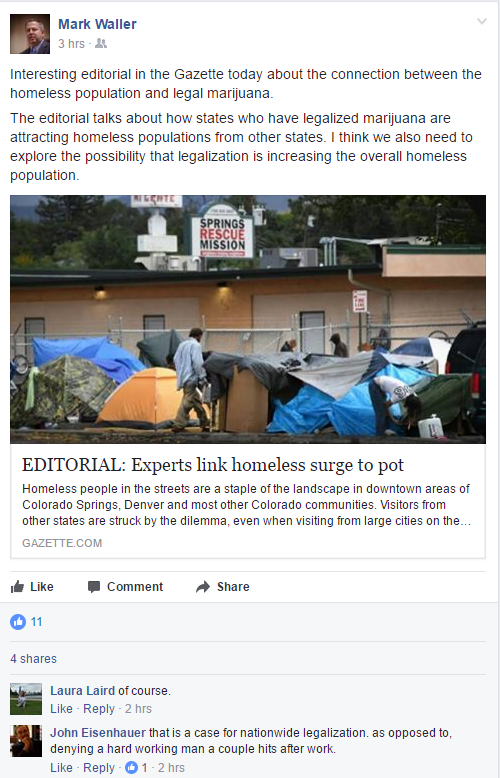 Waller takes speculation that homeless people are moving to states where weed is legal and extrapolates from that a theory that legalizing weed is increasing the overall homeless population. This is very different from what the experts in the article claim, and Waller provides no evidence. Someone on the thread makes the obvious point that if weed were legal nationwide, people wouldn’t have legal weed as a reason to move; problem solved, but Waller isn’t having it because, apparently, he is against legalization and would rather speculate that weed consumption itself causes increased homelessness. 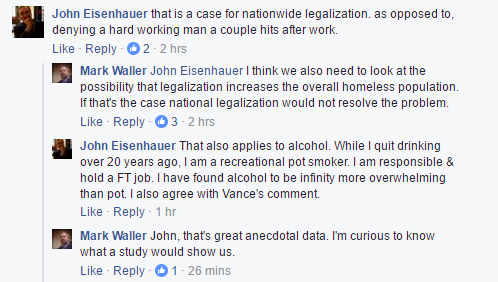 See how easily the obvious counterpoint that alcohol is as bad or worse than weed in causing homelessness is glossed over by Waller, who calls for a “study” of the problem? It’s clear that his agenda is anti-weed, not anti-homelessness, otherwise wouldn’t he be calling for prohibition on alcohol?

I would speculate that Waller’s anti-weed but not anti-alcohol stance is born of the likelihood that he drinks but doesn’t use weed, but that would be irresponsible speculation of the type I am taking him to task for. Let’s just suffice to say that when it comes to confirming his bias, Waller is open to anecdotal evidence, but when it comes to challenging it, he dismisses it out of hand.

In any case, I think it’s important to provide Waller with some objective information about the relationship between substance abuse and homelessness, so here is what the National Coalition for the Homeless has found by studying the subject.