Setting aside that in order to be “born without a father” a child would have to be the product of artificial insemination or have a deceased biological father, (and I suspect that number is quite small), let’s examine what Tancredo’s meme was likely trying to impart, which is the percentage of African American children born into single-parent households without a father. 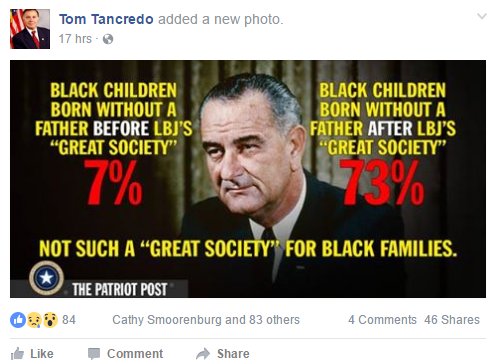 As it generally happens, the meme falls apart under scrutiny. The 72% figure was likely taken from the statistic that 73% of African American children are born to unwed mothers. The implication is that 73% of them don’t have a father in their life, but “unwed” doesn’t mean the father isn’t living with the mother and child. The latest figures available (2014) show that 66% of AA households are single-parent. Even this number is misleading, as many of those households have the father as the only parent.

If you delve further into the statistics you will see that the percentage of African American men having children out of wedlock has been falling for decades.

Given the obvious problems with this meme, I wonder what motivated Tom Tancredo to post it. It certainly isn’t targeted to African Americans, who know it is bullshit, so it must be for the alt-right (racist) crowd that Tancredo increasingly speaks to.