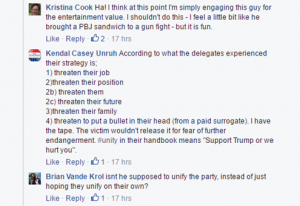 Progressives can argue, yes, but you wonder how recent Trump backer Cory Gardner would respond to fellow Republican Kendal Unrah, who outlined what she sees as the Trump campaign’s strategy to force Republicans to back Trump:

Unruh, a long-time Republican, led a group of Colorado RNC delegates who tried to stop the Trump nomination at the last minute.

Did Gardner himself face any of this treatment, prior to his first or second Trump endorsement? Threats to his family, future? And the bullet in the head part by a paid Trump surrogate? That’s not confirmed, but WTF?

Unruh made other comments about Trump’s supporters on Facebook (See them pictured with this post.), which drew support from State Sen. Chris Holbert.

Vande Krol: Isn’t [Trump] supposed to unify the party, instead of just hoping they unify on their own?

Seriously, you wonder what Trump and Company said to Republicans like Cory Gardner and U.S. Rep. Mike Coffman, who’s also said he’d vote for Trump despite misgivings, to get their support. 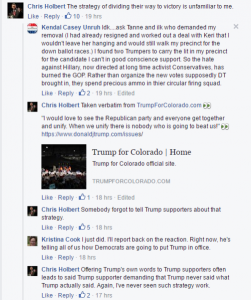