In a village of America, the name of which I have no desire to call to mind, there lived not long ago one of those gentlemen that kept a gun in the gun rack, an old Bible-thumper, a lean hack, and a hound for emotional support.

The ideological sorting of the American body politic has basically completed its Civil Rights era re-shuffling of the two major parties. The electoral successes that Republicans have increasingly had through recent elections have given the false sense that the conservative ideological pinnings were, in fact, the reasons that begot the success for Republicans. Donald Trump lays bare that is not true.

The younger Republican generation, finding their fellowship with elephants instead of donkeys, has followed the template of their predecessors. They are imitators of the past agendas and platforms. But they have never succeeded on their own and the things that have proven so successful in the past just aren’t resonating the way that they used to. 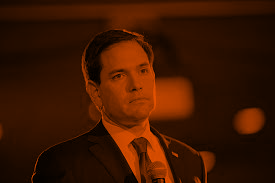 It’s not by chance that Marco Rubio got caught parroting a talking point, over and over. And over. It happened in Colorado with a young Senatorial candidate, hoping to be the next Rubio, imitating Rubio’s robotic repetitions too sincerely (and adding a weird dog reference for good measure).

It’s not the symptom, it’s the problem.

Welcome to the Quixote generation of Republicans. It has been a long steady march to this moment and what’s left of the Party of Lincoln.

There are multiple explanations how we got here. It’s probably a combination of them all. The evolution has led to an interesting moment for the next generation of Republicans.

Millennials are more apt to describe themselves as unaffiliated or independent than with a D or R. They also happen to be the most progressive generation in history. They are now the largest voting eligible population as well.

While most millennials don’t identify as Republicans, some do. And their reasons can range for that decision. But the slice of the population that is Republican is becoming smaller and less representative of the country. That is especially true for young Republicans. They identify as conservative but are increasingly partisans first. They are tribal in their political orientations–those firebreathers that mistake election opponents for enemies.

There have always been partisans. Many are just snake oil salesman playing out their scheme until they have to move on to the next place. The next place is always whatever issue the partisans try to sell or scare the public with.

Today, it’s transgender people using bathrooms. Yesterday, it was an Ebola scare. Tomorrow, a controversy surrounding the hijab. And don’t forget seasonal specials like the War on Christmas.

On larger issues, deny, obfuscate, and obstruct have become the modus operandi (see climate change, corporate welfare, and Merrick Garland, respectively). The Republican partisans spit out press releases that amount to word salad. If you’ve never had the pleasure of reading one from a young Republican operative, it’s a nice combination of talking points chopped up, mixed together, and that come close to a semblance of coherence only on occasion. Donald Trump as a written statement. Those statements come from and are echoed in insulated environments. It’s a game of telephone and the mutations are taken as truths. It’s crazy taken as serious. Pseudo-intellectual as intelligent. And the only thing that matters is whether it’s coming from us or them. And as such, those environments can be vile with just the mention of certain names. I hate Hillary, I don’t know why, but I hate her.

And more and more often, this is the Republican approach to politics. It’s a decidedly unserious approach to governance.

The contortions that Marco Rubio goes through to reach his support for Donald Trump would be impressive if they weren’t so sad. Even after calling Trump “a con man” and fairly questioning his temperament to handle the nuclear arsenal, Rubio has decided the man with the R next to it, regardless of the implications, deserves his support. Regardless of the implications. Repeating that several more times Rubio-style still could not drive home the absurdity of it all. The methodical process that Paul Ryan takes to reach an illogical solution is absurdity dressed up as deliberation and thoughtfulness, but the tribe has spoken. Long live the craziness.

Repeating talking points and finding tribal reasoning to support a decidedly unfit presidential candidate aren’t just domain of Marco Rubio and Paul Ryan though. They are the more high-profile examples like a gentleman from La Mancha. They are the younger generation of Republicans.

Welcome to the Quixote generation of Republicans–bereft of ideas, leadership, and common sense–just fighting windmills.