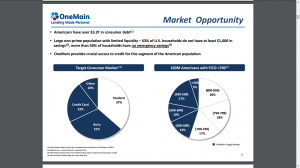 Reporters have done a good job informing us that most people who sign up for predatory loans are struggling.

But there’s a media gap in pointing out just how important the “struggling” part is to the business model of OneMain Holdings, the company backing legislation that would allow it to charge 36 percent interest on more and larger loans.

In a presentation a couple months ago, OneMain boasted to investers about its “Market Opportunity” in the personal loan business.

After noting that “Americans have $3.3 trillion in consumer debt,” and then identifying its “target market” as the 100 million Americans with low credit scores, the company pointed out where its pay dirt lies:

OneMain’s Market Opportunity: “Large non-prime population with limited liquidity–63 percent of American households do not have at least $1,000 in savings, more than 40% have no emergency savings.” [Emphasis added by OneMain Holdings, not by the BigMedia Blog.]

“Non-prime population?” That’s an unfortunate phrase for this company to use, but it spotlights the point.

A lot of poeple are struggling with debt problems, and they need loans. But they obviously need protection from a big company that targets them as a “market opportunity.” How much protection from interest-rate hammering is appropriate?

We’re never going to know exactly how much money OneMain Holdings is really making in Colorado.

We’re just going to get shards of information, like the company representative confirming 30 percent growth in Colorado during the last four years. Or the Colorado attorney general’s office confirming again that access to personal loans is not a problem here. Which indicates that OneMain is happily doing business here.

Objectively, it looks like the company is doing very well, thank you very much.

Except, OneMain claims that it’s not doing well enough, and one key supporter has said, if nothing is done, the company might have to walk away from Colorado!

So if you’re a state legislator, and you know OneMain will never open up its books for review (and you know that people need loans), do you err on the side of protecting those people with little or no personal savings? Or do you respond to the company’s complaints and help it out, to the tune of $9.5 million?

That’s the key question that reporters should zero in on. How much evidence is there that this company actually factually needs to make more money on the backs of Colorado’s “non-prime population?” In fact, is there any evidence at all, except what the company says?